#StopAsianHate is a call to action to stop anti-Asian hate and violence. In solidarity with our Asian community, let’s talk about how to confront hate and injustice when we see it happening, whether it’s on the street or at work. We can no longer be silent bystanders. Instead, we must be upstanders.

Why Being an Upstander is So Important

Confronting injustices, even verbal bullying, is a crucial intervention for preventing violence. In his book The Nature of Prejudice, Gordon Allport explores some of the worst examples of systemic injustice: Nazi Germany and the Jim Crow South, among others. He identifies a common pattern, a dynamic between attitudes and behaviors that can lead to systemic injustice and ultimately to violence or even genocide: antilocution → discrimination → physical violence.

“Antilocution” may be an expression of unconscious bias or conscious prejudice. What does bias have to do with violence? When someone says something that is biased or even prejudiced, it’s not effective to respond as though the person has committed an act of violence. In order to respond with sufficient seriousness, everyone must be aware of the well-worn path from bias to violence. Ignorance is no excuse; unconsciousness is no excuse.

This pattern from antilocution to discrimination to physical violence is not something that happens “elsewhere.” In the 1940s, the United States government unconscionably put Japanese people in internment camps during World War II. This anti-Asian bias was not new. Recently the Los Angeles Times ran a story about editorials from their paper in 1871 that attacked Chinese people using racist language Not long after this editorial ran, a white mob lynched or shot 19 Chinese people and looted $40,000 worth of cash, gold and jewels from Chinatown.

This dangerous pattern is still prevalent today. When the Trump administration used racist language to describe the coronavirus as a way to deflect attention from its own poor handling of the pandemic, an uptick in violence against Asian people was predictable.

The work of our century must be to learn to interrupt this well-worn path from antilocution → discrimination → violence long before it gets to violence. Bias does lead to prejudice, spoken out loud, which leads to discrimination and ultimately violence.

It can be difficult to know what to do when you see injustices happening; here are five ways you can be an upstander instead of a bystander.

1. Direct Confrontation: Use a “You” Statement

One way to push back on injustices like bullying is to confront the person with a “you” statement, as in “What’s going on for you here?” or “You need to stop talking to them that way.” A “you” statement is a decisive action, and it can be surprisingly effective in changing the dynamic.

For example, I was in line at Baskin Robbins in Palo Alto with my then 8year-old twins. There was a man directly ahead of us in line, and ahead of him, a pack of kids who were I guessed around 12 or 13. All of the kids were white, wearing expensive clothes and fidgeting with the latest iPhones when they weren’t razzing this woman.

“Hey, where are you from?” one of the kids asked the woman scooping the ice cream. She looked up and frowned slightly. I felt the worry coming from her. Where was this headed?

“Are you Filipino?” another one of the kids asked. Now I was worried too. The question didn’t have the sound of friendly curiosity.

I looked at the man ahead of me in line, hoping he’d be the upstander. He was frantically tapping away at his phone, intent on ignoring the kids. I looked down at my kids who were clearly wondering what I’d do. I looked at the woman scooping ice cream. She was visibly shaking. If I said nothing now, here in liberal Palo Alto where I could be pretty sure that those kids (a) knew better and (b) were not a threat, what was I teaching my children?

I cleared my throat. “Hey. What are you doing here? You don’t sound very respectful to me.” At least that is what I remember saying. My daughter tells me I said, “Hey, you’re behaving like assholes!” She’s probably right.

Whatever I said, it worked. They quietly paid for their ice cream, left a tip, and beat a hasty retreat. The woman scooping ice cream and I looked each other in the eye and shared a moment.

That wasn’t so hard.

Other Ways to Intervene

There are times, however, when you may not feel safe confronting injustices directly. Other times, you may wonder if it’s appropriate to insert yourself into this situation. Might it be seen as patronizing to act on behalf of the person being harmed?

Hollaback!, a nonprofit that develops training for upstanders, offers an effective “5D” approach to be aware of the different things you can do to shine a spotlight on harassment.

The first is “direct,” and that’s where your “you” statement can help, as described above. 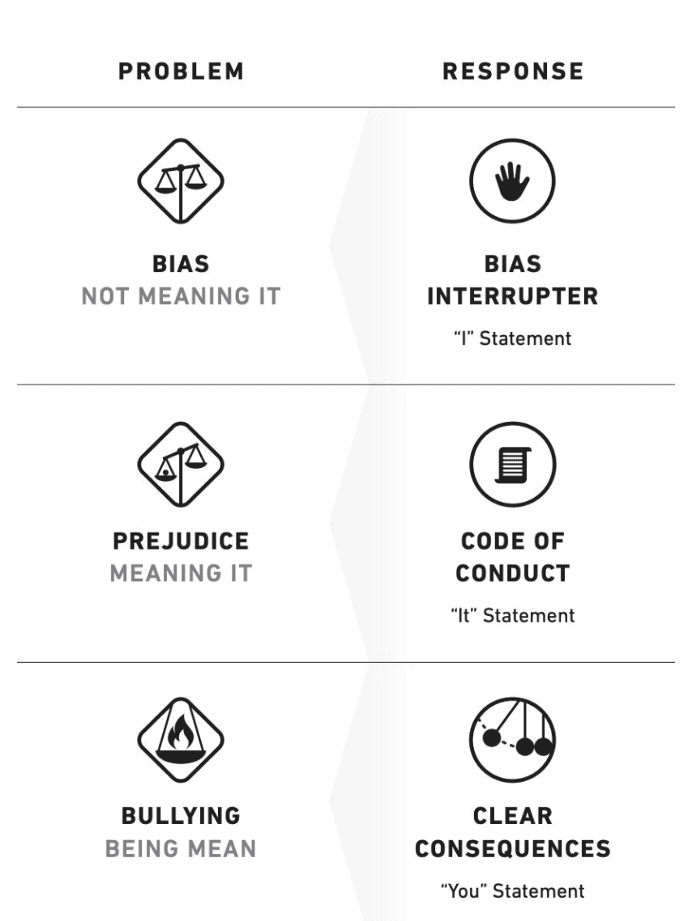 While it may be more satisfying to confront injustices directly—Hey, why are you talking so rudely?—sometimes the direct approach makes things worse for the person being harmed. Other times, it’s just not going to be effective. We’ve all been in meetings where someone is behaving horribly and it feels more effective to try to change the dynamic

and deal with the person causing harm later.

When I was in high school interning at a bank, I was asked to the phones. I was sitting at the front of a large, quiet floor, and I accidentally hung up on a caller I was trying to transfer to one of the people silently executing trades at terminals. “Jesus Christ, girl! Can’t you even work a goddamned telephone?” the trader bellowed.

Seeing this, one of the other traders stood up and threw a squishy ball he had on his desk at the man who’d yelled at me. The bellower missed it, and it bounced off his head. “Jesus Christ, can’t you catch a goddamned ball?” said an upstander, and I’m still grateful to that person 30 years later.

By delegate, I don’t mean ask someone below you in a hierarchy to do the work; I mean get help from another colleague who is in a better position to intervene. You can delegate up, down, or sideways.

Janet observed her colleague Rachel being bullied by an IT administrator, Bert. Bert insisted that Rachel give him her log-on credentials for a software program she was using. Rachel was working on a tight deadline; if she didn’t make it, the project would fail. Bert seemed to enjoy having her in a vulnerable position.

When she asked him why he needed her username and password for the tool, all he would tell her was “It would make me happy.” He kept bugging her and tired of arguing, she relented. Then, when he got her information, Bert locked Rachel out of the program, putting the project at risk.

Standing up for Rachel, Janet first tried the direct approach: she asked Bert to reinstate Rachel. He replied that he didn’t understand why Rachel needed the software in the first place and wouldn’t let her have access to it until Janet provided an answer that “satisfied” him. But it wasn’t Bert’s job to decide who needed which tools to do their jobs; it was his job to make sure the tools they used stayed up and running.

After it became clear that the direct approach wasn’t working, Janet decided to delegate. She went to Bert’s boss and got Rachel the access she needed. She also asked Bert’s boss to address Bert’s bullying. Once tempers had cooled, Bert’s boss called Bert into his office and explained to him there would be consequences if he behaved this way in the future.

Bert’s behavior did not improve and he was eventually fired.

Sometimes uncertainty about the risk of retribution may make you reluctant to intervene on the spot. But you can still check in later. Once, at a sales conference, a woman I worked with commented in front of thousands of people about the “rock-star thighs” of a man on the team. She probably thought that kind of language was acceptable because her boss, a man, regularly made inappropriate comments about the looks of women on the team. Nevertheless, her remark bothered me.

Harassment is still harassment, whether it’s aimed at a man or a woman. The problem here was that the woman worked in HR! Ordinarily, she would be the very person I’d report the incident to. I didn’t feel it would be safe or productive to confront her directly. She supported a leader at the company who was known to be a bully and who was also known to dislike me specifically. I decided this was not a battle I wanted to fight. (Today, I would choose to fight it. But I am less vulnerable today than I was then.)

Even so, fear of retribution didn’t mean I had to ignore what had happened, either. After the conference, I made sure to find the man who’d been singled out and tell him that I’d felt her remark was out of line. He expressed gratitude, saying that her comment had, indeed, upset him.

Your ability to act as an observer of situations, and to document them, can be an invaluable service to victims of injustice—whether because they want to report an episode (and third-party evidence helps) or simply because it is comforting to get a reality check that what happened to them was wrong. An upstander can take notes on what is happening during an incident in a way that the person harmed can’t.

When you see something that seems wrong, you have several options for how to respond. If you’re not sure what to do, run through Hollaback’s 5 D’s and choose to do something. Direct. Distract. Delegate. Delay. Document.

If you want to do more to help stop anti-Asian violence, visit StopAsianHate.Info to donate, learn, volunteer, share and/or report injustices.

To learn more about what to do when you witness or experience injustices, read my new book Just Work: Get Sh*t Done, Fast & Fair ―how we can recognize, attack, and eliminate workplace injustice―and transform our careers and organizations in the process. 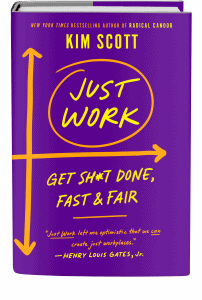