There is a big difference between Caring Personally and giving praise or criticism about somebody’s personality. The final tip in our HIP approach to feedback is that Radically Candid praise and criticism is not about personality. It’s about the work, not the person.

People can’t alter their personality, so saying things like “You’re a jerk” or “You’re sloppy” is neither kind nor does it provide specifics to make the direct challenge clear.

Saying “you’re a genius” when somebody does great work also has an unspoken, dangerous corollary: if the work is bad, “you’re a bloviating buffoon” (or maybe more commonly, “you’re a dummy”).

The result of personalizing somebody’s work and calling them either a dummy or a genius is that they quit taking risks, quit learning, and quit growing.

Saying that great feedback doesn’t personalize isn’t the same as saying that it isn’t personal. People care about their work, so they may react emotionally to criticism. You can’t control another person’s emotions, but you can help make criticism easier by not personalizing.

Here are four tips that can help you avoid personalizing your feedback.

Focus on specifics, not attributes when giving feedback 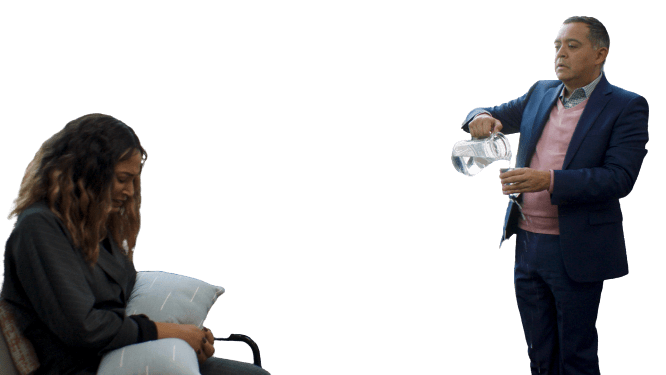 When you give feedback, it’s best to focus on the specifics of the work, not the person’s attributes.

The result of personalizing somebody’s work and calling them either a dummy or a genius is that they quit taking risks, quit learning and quit growing.”

Name-calling clouds your thinking because when you indulge in it, you are generally falling prey to the fundamental attribution error.

This is the tendency for people to use personality attributes to explain someone else’s behavior rather than considering their own behavior or situational factors that were probably the real cause of the behavior.

This makes personalized feedback a problem because it’s a) inaccurate and b) renders an otherwise solvable problem unsolvable.

Beware of your ego when delivering feedback

A brilliant man I worked with, who was actually a really good guy, had a reputation for being a complete a-hole. He managed to turn it around by simply rephrasing something he said pretty often. He quit saying, “You’re wrong.”

Somebody suggested he say instead, “I think you’re wrong.” That was better because it was humbler but still didn’t solve the problem. When he started saying, “I think that is wrong,” people started to be more receptive to his criticism — paying him, in fact, to criticize them as an advisor.

All too often an argument over something simple becomes a contest of egos and people start thinking (or saying behind others’ backs) phrases like “You’re an idiot” or “You’re an arrogant jerk.” When an argument is about an issue, keep it about the issue. Personalizing unnecessarily will only make it harder to resolve the issue.

Avoid the fundamental attribution error by focusing on specifics, not attributes. Instead of saying (or thinking) “What an idiot,” be very clear about what went wrong.

Use our four-step CORE method when giving feedback. Focus on helping the person fix the problem by providing specifics they can act on, rather than criticizing personality traits that they can’t alter.

O — Observation (Describe what was said or done.)

R — Result (What is the most meaningful consequence to you and to them?)

E — nExt stEps (What are the expected next steps?)

Eliminate the phrase “Don’t take it personally” from your vocabulary

When giving feedback, you should expect emotion. Even when you don’t personalize, it’s personal. That’s why you should eliminate the phrase, “Don’t take it personally” from your vocabulary.

If I tell Bo there were ten typos in a presentation, and they left a bad impression in the client’s head and contributed to losing a deal, Bo is going to feel bad, deep down. Bo is probably going to be sad. Bo may have stayed up all night working on the presentation because it was a last-minute thing and feels mad to have been put in a position where sloppy work was inevitable.

Maybe I worked hard not to personalize the issue when I criticized Bo. Still, if I react to Bo’s emotional response by saying, “It’s not personal,” I’m just being insensitive.

People pour themselves into their work, and when the work is not up to snuff, it sure feels personal. When we advise not to personalize issues, we mean, don’t say to Bo, “You are sloppy,” or even, “You did sloppy work.”

But even if you depersonalize the feedback, offer all the CORE specifics, and say, “when the client saw a presentation with so many little mistakes, they thought we didn’t really want the business,” you need to expect that Bo is going to have an emotional response.

It’s futile to say in response to his emotional response, “Don’t take it personally!” Part of your job as a boss (and as a human being) is to deal with emotional responses, not to dismiss them or pretend they’re not there or avoid them.

How not to personalize feedback even when it really IS personal

A woman I worked with had terrible body odor, so people didn’t want to work with her. Few things are more personal than personal space or body odor. Saying “you stink” would clearly have been personalizing. But how can you raise the issue? I tried hard to make the conversation about her colleagues’ noses, not her armpits, and I tried not to be prescriptive about the solution.

Most deodorants contain aluminum which some studies associate with an increased risk of cancer and Alzheimer’s. I didn’t want her to feel she had to choose between effectiveness and disease. But I did have to let her know that if she chose to ignore the problem it would make her less effective at work.

You have to find your own way to talk about these things, but describing the impact of the issue is a great way to avoid personalizing. It can also help to go way up on the Care Personally axis and offer feedback in a spirit of helpfulness.

7 Things to Know About 1:1 Meetings that Will Make You a Better Boss

Stuck In The Feedback Loop? This Radical Candor Training Tool Will Show You The Way Out (And It’s Fun!)

What’s feedback got to do with it? If it’s running a successful business or building…