I’ve received a lot of questions over the last few months about how to apply Radical Candor in a crisis. The coronavirus pandemic has disrupted the workforce in ways we’ve never experienced before. Suddenly, millions of people who are used to working in offices are now working from home. In addition, tens of millions of people have been laid off or furloughed. People have asked me, in these situations, does Radical Candor still apply?

The answer is yes. In fact, COVID-19 has made me double down on Radical Candor, not shy away from it. In its most basic form, Radical Candor is a framework to facilitate communication that is kind, clear, specific and sincere. It’s about being able to Care Personally and Challenge Directly at the same time. While this kind of communication is always important for building trust and maintaining relationships, it’s even more important during a crisis when anxieties are heightened and everything is uncertain.

This is one of the reasons I’ve partnered with Torch to offer “The Radically Candid Coach” a virtual leadership course for coaches (or anyone who wants to be a better leader) that focuses on getting, giving, gauging and encouraging feedback, building a team, getting stuff done without telling people what to do, as well as provide plenty of practical tips for effective meetings.

A Crisis is Not Business as Usual

Pretending that everything is business as usual when working during a crisis will create more problems than it will solve. Whether you’re a manager, a coach or an individual contributor, be honest with yourself and others about what you’re capable of accomplishing and what you need to stop doing. While this sounds easy and maybe even obvious, it’s much more difficult than it seems because it goes against basic human instincts.

There was a recent piece in Harvard Business Review that described What Good Leadership Looks Like During This Pandemic, from Michaela Kerrissey of the Harvard T.H. Chan School of Public Health and Amy Edmonson, author of The Fearless Organization and a professor at Harvard Business School who has introduced the idea of psychological safety.

It showcased a few examples of outstanding leadership, such as New Zealand Prime Minister Jacinda Ardern whose March 21, 2020 talk was described as “…clear, honest, and compassionate: It acknowledged the daily sacrifices to come and inspired people to forge ahead in bearing them together.”

The authors note that human instincts, combined with management training, tend to cause leaders to take the wrong actions in a crisis; for example, waiting for additional information versus acting with urgency or downplaying a threat and withholding bad news versus communicating with transparency.

When these human instincts take over, it’s easy to fall into two of the worst leadership styles.

I’ve received many questions about whether empathy is more important during a crisis. While it’s never wrong to move up on the Care Personally axis, doing so because you want to protect your employees from potential bad news is actually Ruinous Empathy, and it can cause harm.

Ruinous Empathy is “nice” but ultimately unhelpful or even damaging. It’s what happens when you care about someone personally, but fail to challenge them directly. It’s praise that isn’t specific enough to help the person understand what was good, or criticism that is sugar-coated and unclear.

In the context of COVID-19, Ruinous Empathy could be your not telling team members that the company is in trouble and they might lose their jobs. Or it’s not giving them feedback on their work because you’re worried it will stress them out.

It’s telling them they did a good job when their Zoom presentation was full of typos. Or it’s saying something like, “That presentation was fine, but do better next time.” This kind of criticism doesn’t let the person know what they need to do better, which makes it impossible for them to improve. 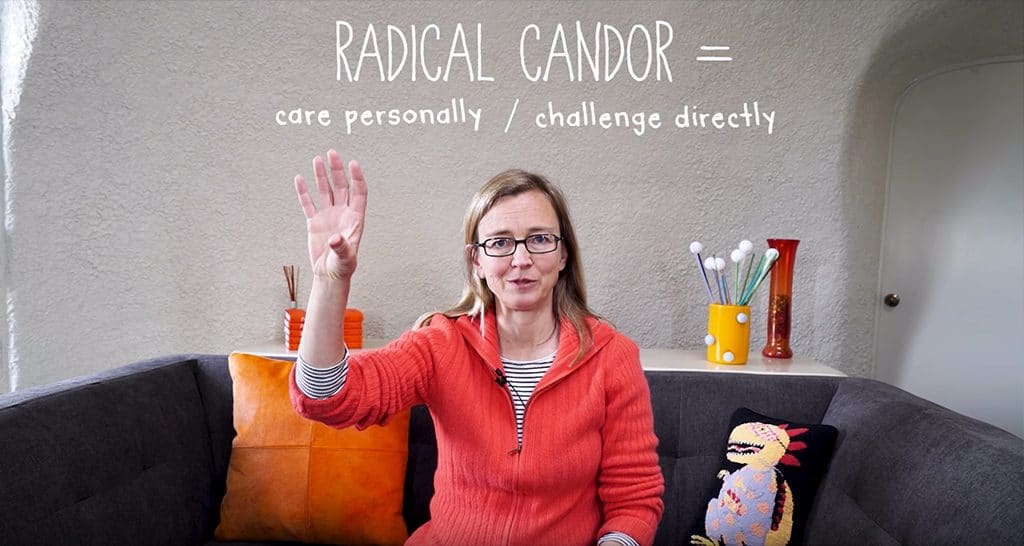 Being the boss is hard during the best of times, and it can be downright exhausting during a crisis. While it’s tempting to just check out and ignore problems, this kind of behavior can lead to what I call Manipulative Insincerity, which is what happens when you neither Care Personally nor Challenge Directly.

It’s praise that is non-specific and insincere, or criticism that is neither clear nor kind.

People give praise and criticism that is manipulatively insincere when they are too focused on being liked or they think they can gain some sort of political advantage by being fake, or when they are too tired to care or argue any more.

Perhaps you have a client of someone you manage who is late to every virtual meeting, but you just don’t feel like dealing with having a conversation with them so you stay silent. This is Manipulative Insincerity. This kind of behavior doesn’t allow you to understand why this person is late, it doesn’t let them know their actions are hurting them at work, and therefore it guarantees the problems will persist endlessly versus getting solved in a two-minute conversation.

Manipulative Insincerity is the very worst way to respond to a crisis, although it’s also very human. We just kind of pull into our shell, turtle like, and of course we all need to do that from time to time, we need a little bit of self care — but we also need to remember as leaders and coaches the emotional labor involved in leading people through a crisis is part of our job.

While it’s true that we undervalue the emotional labor of being the boss, a crisis often highlights that not everyone who is a leader should be. This emotional labor is not just part of the job; it’s the key to being a good boss.

A 2018 study published in the Yonsei Medical Journal reported that the sustained stress of emotional labor can quickly lead to burnout, psychological distress, and depression. Now more than ever, it’s important to find ways to manage that stress — to take care of yourself so you can lead your team through uncertainty. This means knowing what you need to stay centered and making sure you make time for it.

I’ve certainly noticed some of the best examples of leadership and some of the worst examples of leadership during COVID-19. One of the best examples I saw recently was a leader who gave everybody on their team four-day weekend when we went into working from home and said, take Friday and take Monday and figure out how you’re going to rearrange your life and so that you can take care of whoever is at home with you and then also how you can still show up for work when possible.

This person also identified what work still needed to be done, but also identified work, and asked the team to identify work, they could just stop doing for this period in recognition of the fact that this situation puts a lot of burden on everybody. You can’t offer the same solution for everyone. People who are at home alone need different things than people who are at home with six kids who need to be educated.

On the other hand, I’ve been told about a leader who installed spyware basically on everybody’s computer so that they could see how long everyone was working every day. That, to put it mildly, is not helpful for morale.

At the very core of leadership is building trust. And Ryan Smith, who is the CEO of a company called Qualtrics, which some of you might know was one of the people who I coached, zeroed in on this very early in his tenure as CEO. And one of our first coaching sessions, he asked me, he said, “I’ve just hired this new team. How can I build trust quickly with that team so that we can get great things done?”

In my book, Radical Candor: Be a Kick-Ass Boss Without Losing Your Humanity, I explain how I responded to Ryan with a quote from economist John Stuart Mill. “The source of everything respectable and [human] either as an intellectual being or as a moral being, is that [their] errors are corrigible. [They are] capable of rectifying [their] mistakes by discussion and experience, not by experience alone. There must be discussions to show how experiences can be interpreted.”

Let’s think about what that means for your leadership and how you build trust as a leader or coach. Challenging others and encouraging them to challenge you helps build trusting relationships because it shows one, you care enough to point out both the things that aren’t going well and those that are, and two, that you are willing to admit when you’re wrong and then you’re committed to fixing mistakes that you or others have made.

But because challenging often involves disagreeing or saying no, this approach embraces conflict rather than avoiding it. So it’s so tempting in a crisis to avoid conflict, but resolving conflict — and resolving it quickly — is one of the things that we can do to build trust.

Balancing Growth and Stability: Why Your Team Needs People In Both Superstar and Rock-Star Modes