There is an order of operations to practicing the principles of Radical Candor. The first thing to do is to ask for criticism, especially if you’re the boss. This is awkward at best, so here are five tips for how to successfully solicit Radical Candor.

Have a go-to question

It’s awkward to ask people to tell you frankly what they think of your performance — even more awkward for them than it is for you. I recommend that you come up with a go-to question. There are three elements to a good go-to question.

Of course, you’re not really just looking for one thing; that opening question is just designed to get things moving. If you don’t have time to keep reading, do this one thing: write down your go-to question, to whom you’re going to ask it, and when (today not tomorrow.) 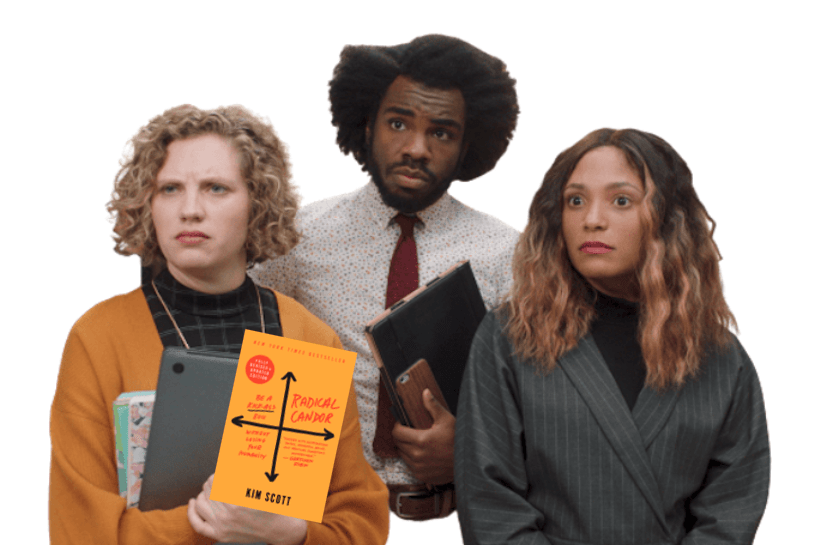 No matter how good your question is, the person you ask won’t want to answer it. The only way out of this uncomfortable moment is through it. If you try to make the person comfortable, you’ll just let them off the hook. You won’t get the Radical Candor that you need to improve and grow.

Most people will try to wriggle out of the conversation. They probably didn’t see your question coming, and so they feel immediately wary. “Really everything is fine,” they may insist. Their discomfort will make you feel uncomfortable, and you may find yourself reassuring them by nodding and offering an “I’m glad to hear that.” Don’t do this. It’s essential that you prepare yourself for these scenarios in advance and commit to sticking with the conversation until you have a genuine response.

One technique is to count to six before saying anything else, forcing them to endure the silence. The goal is not to be a bully but to insist on a candid discussion — to make it harder for the person to say nothing than to tell you what they’re thinking. If they can’t come up with anything on the spot, you can always arrange a time to meet again. If counting to six doesn’t do the trick, ask the question again. And again if necessary.

One of the bankers who led Facebook’s IPO told me about a time that Sheryl Sandberg asked him for feedback after a meeting with potential investors. “What could I have done better?” she asked him. He couldn’t think of anything. The presentation had been a home run. Sheryl wouldn’t let him off the hook, though. “I know there was something I could have done better in there.”

He still couldn’t think of anything. Now, he was getting nervous. “You have a reputation for being great at giving feedback,” Sheryl encouraged him. “I bet if you think about it you can come up with something.” Now, he was sweating. But still, she didn’t let him off the hook. She smiled expectantly and stayed silent.

That was when he finally thought of something, and told her. “Thank you!” She said, “I’ll do better next time!”

Another way to embrace the discomfort is to point out when people’s body language is at odds with what they’re saying. Imagine you’re at a meeting with a colleague with whom you’ve just shared a big, possibly impractical idea. He responds, “Oh! Great idea,” but you notice that he hunches over and crosses his arms defensively. Ignoring that sort of nonverbal cue is a lost opportunity. Without being obnoxious, try saying something like, “Then why are you folding your arms and hunching down in your seat? Come on, tell me what you’re really thinking!”

Listen with the intent to understand, not to respond

You’ve finally gotten the other person to offer some criticism. Once again, you have to manage your response. Whatever you do, don’t start criticizing the criticism. Don’t start telling the other person they weren’t Radically Candid! Instead, try to repeat what the person said to make sure you’ve understood it, rather than defending yourself against the criticism that you’ve just heard.

Listen to and clarify the criticism — but don’t debate it. Try saying, “So what I hear you saying is . . .” If you find my language too programmatic, find another way to say it.

If you’re like most people, you’ll probably feel a strong urge to act defensively when you get criticism — or at the least to explain yourself. This is a natural response, but it pretty much kills any chance that you’ll get the person to offer you the gift of candor again. So don’t feel bad that you are having this very normal human reaction. Manage your feelings rather than letting them manage you.

Remind yourself going in that no matter how unfair the criticism, your first job is to listen with the intent to understand, not to defend yourself.

Reward criticism to get more of it

Once you’ve asked your question and embraced the discomfort and understood the criticism, you have to follow up by showing that you really did welcome it. You have to reward the candor if you want to get more of it.

If you agree with the criticism, make a change as soon as possible. If the necessary change will take time, do something visible to show you’re trying. For example, my friend and former colleague Russ once complained that I interrupted him. It was true; I am an inveterate interrupter. I tried not to do it, but I knew I wouldn’t succeed in eradicating this bad habit just because he’d mentioned it.

Telling Russ that I couldn’t help myself was hardly a good way to reward his candor. So I said, “I know, it’s a problem. Can I ask you to help me stop interrupting?” I pulled a fat, blue rubber band out of my drawer and put it around my wrist. I asked him to snap the rubber band every time I interrupted him. Russ thought this was funny, and agreed.

I wore the rubber band, which I now think of as my “radical bander,” to my staff meeting. I asked everyone present to help me by snapping it. Sure enough, others started snapping the rubber band. Then, I mentioned it at an all-hands meeting. Additional snapping did help me interrupt less. But equally important was that it sent a strong signal that I had heard the criticism and was taking action, and that I wanted to hear more criticism.

In some cases, of course, you may disagree with the criticism. It’s here that your Radical Candor skills become essential. It is never enough to simply acknowledge the other person’s feelings— that invariably feels passive-aggressive and insincere. Instead, first, find something in the criticism you can agree with, to signal that you’re open to criticism. Then, check for understanding— repeat what you heard back to the person to make sure you got it. Then, let them know you want to think about what they said and schedule a time to talk about it again.

It’s essential that you do get back to it. The key then is to explain exactly why you disagree. If you disagree with the feedback, giving the person a thoughtful, respectful explanation of why is the best reward you can offer for their Radical Candor. Sometimes they’ll come around, sometimes not. Sometimes they may even spot flaws in your reasoning that cause you to reconsider. The reward for their candor might have to be a full explanation of why you disagree, an openness that invites them to poke some more at your logic and a clear idea of when it’s time to stop arguing and commit. 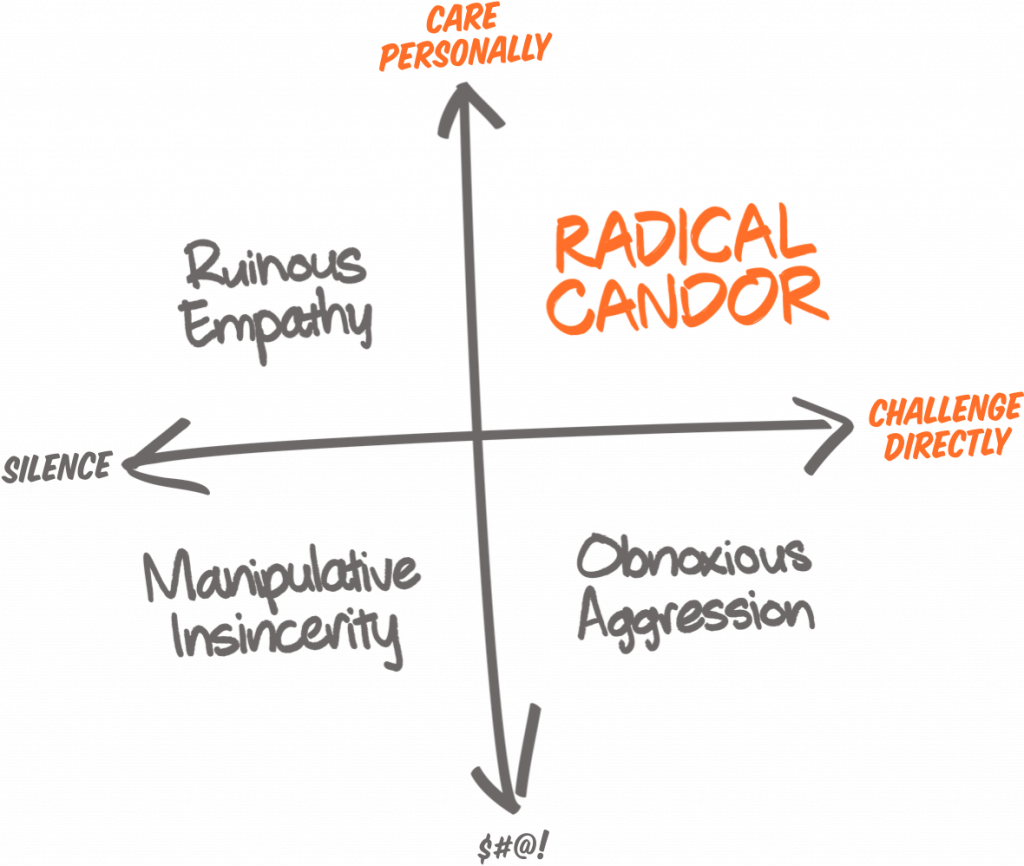 How many times each week do the people you work with criticize you? How often do they praise you? If it’s all praise and no criticism, beware! You’re having smoke blown up your rear end. You need to work harder to get them to criticize you. Try teaching the people on your team about the idea of Radical Candor.

Explain why you don’t want them to be ruinously empathetic or manipulatively insincere with you. Tell them you’d welcome Radical Candor, but you’d prefer Obnoxious Aggression to silence. Print out the Radical Candor framework, and when you’re having a conversation and you feel like somebody is pulling their punches, point to Radical Candor and ask them to go there.

Remember, when it comes to soliciting Radical Candor, good news is no news, no news is bad news, and bad news is good news. Order Kim’s new book, Just Work: Get Sh*t Done, Fast & Fair, to learn how we can recognize, attack, and eliminate workplace injustice ― and transform our careers and organizations in the process.