It’s not brutal honesty. Radical Candor really just means saying what you think while also giving a damn about the person you’re saying it to.

Watch Radical Candor author and co-founder Kim Scott give the quick-and-dirty explanation below.

What Is Radical Candor? Kim Scott Explains It in 6 Minutes

Your entire working life you’ve been told to be professional. Too often, that’s code for leaving your humanity at home. To build strong relationships, you have to Care Personally.

This can be as simple as showing enough vulnerability to admit when you’re having a bad day and creating a safe place for others to do the same.

Since you learned to talk you’ve likely been told some version of, “If you don’t have anything nice to say, don’t say anything at all.” Then you become the boss and the very thing you’ve been taught not to do since you were 18 months old is suddenly your job.

In order to succeed, you have to Challenge Directly. Challenging people is often the best way to show you care. It does not mean that whatever you think is the truth; it means you share your (humble) opinions directly.

Radical Candor happens when you put these two things together to give feedback that’s kind, clear, specific and sincere.

What Is Obnoxious Aggression? 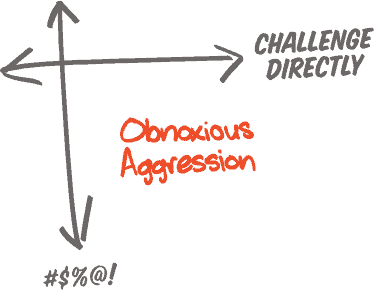 Obnoxious Aggression, also called brutal honesty or front stabbing, is what happens when you challenge someone directly, but don’t show you care about them personally.

What Is Ruinous Empathy?

Ruinous Empathy is what happens when you want to spare someone’s short-term feelings, so you don’t tell them something they need to know.

It’s praise that isn’t specific enough to help the person understand what was good or criticism that is sugar-coated and unclear. Or simply silence.

Ruinous Empathy may feel nice or safe, but is ultimately unhelpful and even damaging.

What Is Manipulative Insincerity? 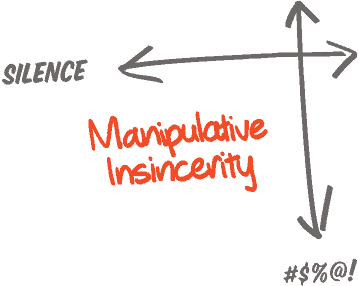 Manipulative Insincerity is praise that is insincere, flattery to a person’s face and harsh criticism behind their back.

It’s the kind of backstabbing, political, passive-aggressive behavior that might be fun to tell stories about but makes for a toxic workplace, ruining relationships and ruining work.