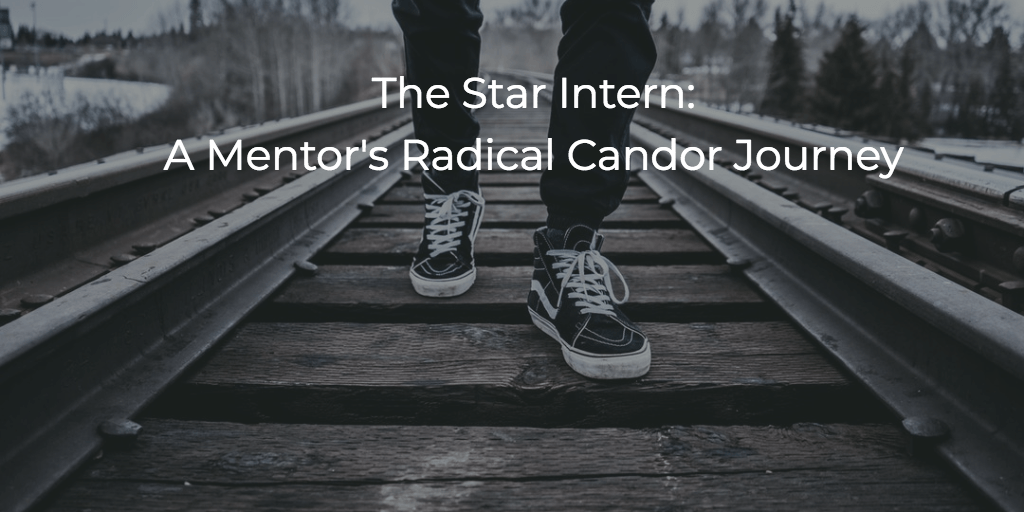 We recently heard from Dimitar Simeonov, who shared his story about reading Radical Candor while managing an intern when he was working at Twitter as a senior data scientist. While Dimitar’s no longer at Twitter, at the time he had been there for four years and was responsible for the intern’s technical mentorship. Thanks for sharing the learning and the love, Dimitar!

Two weeks in as an intern mentor, I had a dilemma. My intern was performing with the cadence and quality of a full-time engineer. I felt I needed to challenge him and help him learn further. I felt like he hadn’t reached his potential and I needed to help his growth. I thought if I didn’t do it, he might get bored and start underperforming, not get a return offer, or not be interested in a return offer. Most important, the internship wouldn’t have been worth his time.

This was the first time I was a mentor, and I was quite anxious, feeling unease about providing personal criticism from a point of authority. I was happy with the progress, but also worried, because it made the task of giving critical feedback harder for me.

I didn’t feel like criticizing him at all. There weren’t many things to criticize. I was afraid that if I spent too much time on minor issues, I might come off as complaining too much. That he might feel discouraged, and we’d have a harder time building camaraderie.

To contrast personal and technical feedback, I am very happy to go into a technical argument, but very rarely, or never would go and criticize the approach of others. I was providing technical feedback to my intern all the time, on the code reviews, without having to wait until the next 1:1.

So technical feedback was not an issue for me — I could go into a technical argument with other engineers, focused entirely on technical merit, and emerge without me or them feeling personally insulted. The code is the code, but people are hard for me.

Having recently read Radical Candor, I knew that if I didn’t point things out, complacency could sneak in, and he’ll have a “meh” experience. I would have failed as a mentor to do my job.
I used two techniques for overcoming my dilemma.

The first technique I learned from the Radical Candor book, that if I am more receptive to feedback, and listening earnestly, then he in turn would be more receptive, because he’ll see that I care personally through my actions. During our one-on-one meetings I was trying to extract things I could have done better, asking the same questions every time, and providing enough pause so he could answer.

I asked for things I could do or stop doing to make it easier for him. I asked for feedback from him. I also repeatedly asked him about the direction of his career, whether he’d prefer to learn more about code patterns and how to write great quality code, or whether he’d be more interested in product development.

I saw these kinds of career questions in Radical Candor, and I thought it would be a good way to break the ice and show that I care. After several weeks of bringing up these questions, my intern started answering them. He chose to focus more on the product aspects and I assigned him more product-related tasks. He provided feedback to me that having a written plan for the work we were doing together helped him understand more easily the scope and importance of the various tasks.

I heeded his comment. I made sure to always have a written up-to-date plan, which helped us collaborate more closely as his internship progressed. This written plan evolved into a wiki page containing all the current, past and future work on the project, broken up with milestones and tickets’ statuses. Having learned this from my intern, I used the same format for my other projects.

The second technique was to create a dedicated space for suggestions for improvement during our 1:1. I structured the meeting in a way that we talked about feedback and career prospects for him before discussing any kind of “status updates” or technical issues.

After the first few weeks, I told him, ‘Hey, let’s try the following approach. Every week, during 1:1, I will talk about one thing that you could have done better during the last week.’ This provided me a cover to discuss seemingly minor things without being petty. What’s more, focusing on a single thing per week provided more clarity to him about what I thought was important.

One of the weeks he did a great job on his project, and I didn’t really have much critical feedback — he even made a presentation to the team that he delivered well. That week I gave him feedback that he did great and the only improvement that I see is that he used the word “study” incorrectly, instead of “experiment” during the presentation. This showed that I still paid attention to his work through the week and valued it, and still helped him make a minor adjustment.

At the end of the internship, he did a presentation about his work and there was a slide in it that made me happy. The slide was about what he learned during the summer. He started mentioning things that would appear as bullet points on the slide.

But when the space on the screen was full he kept on going … new bullet points appeared all over the place, overlapping at angles with the pre-existing ones, faster and faster.  It was a pour of learnings. He said, “I learned so much.” Everyone laughed and clapped.

I cannot claim credit for all the learnings, but as his mentor I’d like to think that my behavior and feedback during the 1:1 meetings helped, and that Radical Candor helped me challenge directly and care personally.

You can continue following Dimitar’s journey on his blog and on Twitter. And let us know how you are bringing Radical Candor to your team, too!