Second City Works and Radical Candor bring together learning and development leaders from some of the world’s top organizations to exchange ideas, gather insights and share laughs at a Launch Partner Summit for Improvising Radical Candor, a workplace comedy online learning program available in early 2020.

The half-day Launch Partner Summit was an opportunity to gather insights from strategic partners about how to best support the successful delivery of the digital shorts and sustained use of the suite of improv exercises that teach leaders to practice core management skills.

The Launch Partners, which include learning and development leaders from some of the world’s top organizations, shared ideas with each other, as well as with members of the Improvising Radical Candor ensemble, including Kim Scott, author of Radical Candor: Be a Kickass Boss Without Losing Your Humanity and co-founder of Radical Candor, LLC, and Kelly Leonard, long-time creative executive at The Second City and the author of Yes, And: How Improvisation Reverses ‘No, But’ Thinking and Improves Creativity and Collaboration — Lessons from The Second City.

“We partnered with Second City Works to bring Radical Candor to life in a way that’s relatable, engaging and hilarious,” says Scott. “We also want to help teams as they roll-out the content, which is why it’s critical we understand the challenges and hurdles our implementers might experience so we can support them every step of the way with relevant tools and resources for success. This is not your grandfather’s training program.”

“Collaboration is at the heart of what we do at The Second City, whether it’s writing an award-winning comedy production or co-creating training programs with partners and clients,” says Leonard. “We don’t want to just throw this over the fence to companies and say, ‘Here you go! Have fun with that!’”

The Launch Partners are committed to adopting a culture of Radical Candor at their companies. Their shared goals include improving collaboration and innovation, fostering psychological safety, creating a culture of feedback, and rolling out sustained learning content that’s equal parts fun and effective.

“Our goal is to build a candid culture where each individual seeks different and new perspectives while respectfully sharing their own,” says Ellie Busmire, talent development manager of ServiceNow, a digital workflow company. “I’m excited to be involved in the Launch Partner community to learn from peers, share ideas and help shape the rollout.”

The day also included an exclusive tour of The Second City building led by Leonard, a 31-year veteran of the comedy institution. He shared stories and anecdotes of famous alums before they were household names, like a certain late night host who held a 15-year record for most t-shirts sold at the box office. And the evening ended with the opening night of The Second City’s new revue, Do You Believe In Madness? 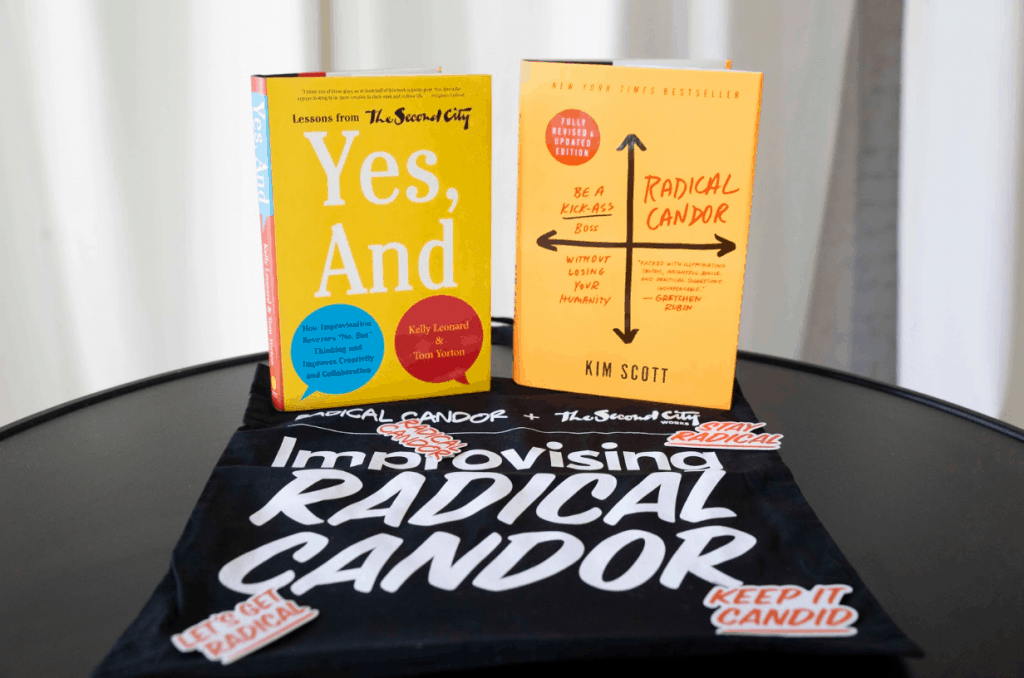 The Launch Partners will continue to serve as a community for insights and play a vital role in shaping the implementation and rollout of Improvising Radical Candor’s series of comedy-based videos debuting in March 2020.

“This is not just a one-and-done,” says Jason Rosoff, CEO and co-founder of Radical Candor. “We’re excited to keep the Launch Partners involved throughout the development, rollout and sustainment processes. We are incredibly grateful for their eagerness to participate and trust in us.”

ABOUT IMPROVISING RADICAL CANDOR
Improvising Radical Candor is a co-production of Radical Candor, LLC and Second City Works. It is currently offered to teams and organizations as a live event in both a keynote and workshop format. A suite of digital shorts, videos and interactive exercises to inspire individuals and teams to practice the important skills of giving, receiving and encouraging feedback at work, will be available in March 2020. By exercising Radical Candor through improvisation, teams learn the art of giving and receiving feedback while developing core improv fundamentals that emphasize skills like active listening, staying present and being others-focused. ImprovisingRadicalCandor.com

ABOUT RADICAL CANDOR
Radical Candor, LLC, co-founded in 2017 by Kim Scott and Jason Rosoff, is an executive education company on a mission to rid the world of bad bosses. Candor Coaches deliver keynotes and workshops around the world, working with teams to implement the ideas in Scott’s best-selling book Radical Candor: Be a Kickass Boss Without Losing Your Humanity. radicalcandor.com

ABOUT SECOND CITY WORKS
The Second City has produced some of the most unforgettable satire and influential comedians of the last sixty years. Its pioneering methods inspire the mindsets and behaviors that lead to rapid innovation and incomparable content. Second City Works uses those same methods to create professional development, content and events that drive personal growth and organizational improvement. secondcityworks.com

GET MORE INFO
Download additional press materials, including our promo reel, print quality photos and logos, at ImprovisingRadicalCandor.com. You also can send a press request to press@radicalcandor.com.